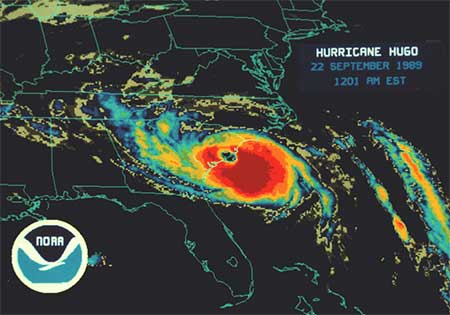 “I would like to have been somewhere where I could have seen it,” says a Lowcountry resident who lost everything to Hugo. It’s a reaction shared by many, and is perhaps a desire to understand more fully the source this incredible destruction. As the fiercest storm in modern history made landfall on the Isle of Palms, two young Medical University of South Carolina students were there, and lived to tell about it.

The point in time most vivid to one of them, Michael A. Pulliam, was acceptance of the belief that he would die. He and friend Kevin Williams were swept from a second floor of the house on the front beach and were propelled through twelve-foot white-water currents for a city block, landing finally on the roof of a one-story house. Sense of time was suspended, he says, the water, the wind and ink-black darkness were his only perceptions. “We didn’t scream,” he said. There wasn’t time.

Their experience with Hugo began calmly on Wednesday night as the two headed for the island to board up Pulliam’s family beach house at 2910 Palm Blvd. The family built the house in the 50’s and Pulliam remembers spending summers there as a child. The young men went with the intention of remaining there during the hurricane.

“It was half crazy, I guess,” Pulliam said. “But I really like the outdoors in bad weather. We didn’t want it (Hugo) to hit, but we were excited about the onslaught.”

With no radio in the house, and a television that did not work, Williams and Pulliam were unaware that by 6 p.m. on Thursday the storm was upgraded to category 4, with winds of 135 mph predicted. “We weren’t concerned at first,” Pulliam said, “because the winds were only 70-80 mph. But we had no television. If we had known the storm was upgraded, we’d have left.”

The two were in touch by phone with parents and friends in Columbia, who advised them of the progress of the storm. Pulliam’s mother called the Isle of Palms Police Department to report the presence of the two on the island,” Pulliam said. His grandfather called to instruct them to leave the house, a two-story brick construction, and go to the house next door, which is also two stories, but on stilts. “My grandfather was worried about the 12-18 ft. tidal surge predicted. He didn’t think the house would stand. There was nowhere for the water to go.”

They left at 8:30, when the power went out. “We gathered the candles and went next door,” to the house owned by Othniel Wienges of St. Matthews. “It was very, very dark.”

By 9 p.m. Hugo began to flex his muscle. “The house started to shake and glass began to break upstairs, ” says Pulliam. They found a weather radio and learned that, incredibly, the storm was not predicted to make landfall for another three hours. We realized then we were in for quite a ride.”

In the hours to come, says Pulliam, “the water became the most terrifying thing of all. There was more water from the water than from the wind.” In less than an hour the water had risen by 15 feet to seep in air conditioning ducts in their second-floor refuge. The floor’s linoleum would later become “a giant bubble, with water underneath.” Waves battered the structure.

The noise of the water and wind was not the only sensory input to affect Pulliam and Williams. As the eye approached, barometric pressures plummeted, causing the ears to “pop” in a manner similar to ascending in an airplane. “There was an electric feeling in the air, is the only way I can describe it,” says Pulliam. “The hair on your neck stood up.” A five-gallon water cooler in the house began to bubble.

The strange calm of the hurricane’s eye lasted about thirty to forty minutes. “The wind slowed and it got quieter,” Pulliam said. “All you could hear was water under the house. During the eye, we had some contemplative time. We realized we’d both lost our cars (Which were floating out front) but that didn’t bother us. We thought we were lucky to be alive. The two also believed the worst was over. “I thought, well, the house made it through the first part of the storm, and the second part can’t be as bad.”

As anyone who experienced the storm, even hundreds of miles inland, discovered this was not the case. “In the time that you could drop a penny, Pulliam recalls, “it started back up again,” with greatly increased force. “The wind began immediately to come in opposite direction. In the first part of the storm the wind came from the front of the house,” says Pulliam,” and blew the water from the house. We weren’t having a good time or anything, but I didn’t fear for my life at that point. When the wind changed direction, it blew the water toward the house. The house started shaking considerably more and water started coming in through the sliding glass door. There were serious prayers going on in the kitchen.”

He recalls the darkness was overwhelming. :”I looked out the window. The houses are only 20 feet apart, but I couldn’t see my house. I thought it was gone.”

The young men realized a critical decision was in order. Should they risk a retreat to volatile third floor or take their chances with the tides on the second floor?

A gust from Hugo decided for them. “I went to the front door and opened it to see how high the water was,” Pulliam said. With Williams holding on to his shoulder, I stuck a foot out the door. The wind sucked us out and the porch collapsed. The water was very cold. It was like white-water rapids. You don’t sink in water like that, your just carried along.”

Pulliam doesn’t recall how long they lay face down on the roof of the one story house a block away. Maybe an hour he says. At approximately 3 a.m. “you could start to barely see again, and then the water went out as fast as it went in.”As dawn broke at the still-standing Pulliam house, Michael recalls the scene of destruction.”There was a piano and furniture in the front yard which I thought at first was ours, but weren’t. There were appliances on the beach. It was like there was no civilization and you were alone. It was hard to imagine the peninsula was still there and functioning.”

When Hugo made landfall on the Isle of Palms, the two young men felt the storm in life-threatening dimensions but did not see it or understand the full reach of its power. No one did. Hugo hit the darkness of night, and sight was useless. Understanding, if it came at all, would not begin until morning.