The history of the Isle of Palms goes back to ancient times. Thought to be at least 25,000 years old-its first settlers were the Sewee Indians who, no doubt, were as awed by its gleaming shores 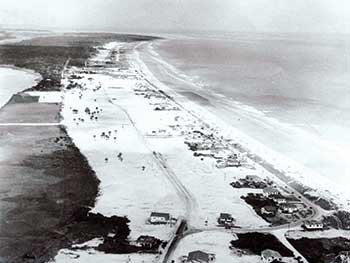 and lush tropical growth as every newcomer to the island since. The jungle and waters teemed with wildlife-so much so that for many years it was known as Hunting Island.

The Sewees were said to have greeted the area’s first English settlers by swimming to the ships and carrying the travelers to shore. In fact, the English so beguiled the native Americans that some reportedly attempted to canoe to England, and were lost at sea in a storm. Legend has it that pirates also frequented the isle’s balmy shores, although buried treasure has yet to be found in any Isle of Palms neighborhood.

Thomas Holton, a settler from Barbados, was granted title to the island in 1696. Yet, throughout the mid-18 century, Long Island, as it was now called, remained virtually unknown, except for the occasional hunting and fishing trip.

The island played an important role in the Revolutionary War when British Army General Sir Henry Clinton launched an attack from its shores on neighboring Sullivan’s Island. The attack failed when his cavalry attempted to cross Breach Inlet the morning of June 10, 1776. They were caught in treacherous currents and a hail of bullets from American troops led by Colonel William Thompson. Clinton’s defeat and the gallant stand at Fort Moultrie forced the retreat of the British fleet.

The area was also of significance during the Civil War as a point of departure for the CSS Hunley, the first submarine to sink an enemy vessel. The Hunley and her crew were lost at sea after engaging and sinking the USS Housatonic. Over a century later, the Confederate submarine was discovered off Sullivan’s Island and recovered in 2000. The island remained uninhabited until the late 19th century, when it became popular with Charlestonians as a summer retreat…

Visitors to the Isle of Palms found more ways than one to enjoy the beaches. A popular sport-until outlawed in 1953-was automobile racing, and enthusiasts found the smooth broad expanses of sand the perfect racetrack for testing the new “horseless carriages” of the day.

By 1912 James Sottile had created an amusement park that drew even more visitors to the island. His spacious beach pavilion featured private dining rooms on the 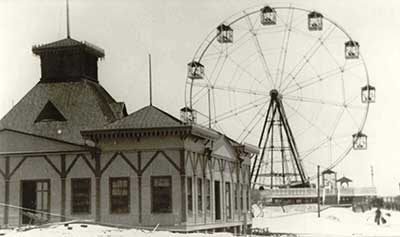 second floor, a 400-foot dance hall with high ceilings, a smooth dance floor and windows open to sea breezes on all three sides.

The amusement park thrilled visitors with rides like the “Steeple Chase” race and a Merry-Go-Round. The enormous Ferris wheel was visible, on a clear day, from the south end of High Battery, over 15 miles away in Charleston. The ride was originally built for the Chicago World’s Fair in 1892 and was used by the Cotton Congress in Atlanta and Coney Island in New York before coming to South Carolina.

With the island’s reputation growing every day, Dr. Joseph S. Lawrence dubbed it the “Isle of Palms” to attract tourists, and active development truly began. The Isle of Palms Post Office opened August 5, 1913, in Hudson’s Pavilion where a few letters were brought in for distribution. Post Mistress Ruth Clump ran the second oceanfront post office for 23 years.

After World War I the Isle of Palms fell into financial difficulty, forcing the county sheriff to seize the ferryboats on February 20, 1924 in compliance with a court order. In 1926, the trolley trestle over Breach Inlet was converted into a bridge, allowing automobiles to cross over from Sullivan’s Island to Isle of Palms. Access became even easier in 1929 when the Grace Memorial Bridge replaced the Charleston harbor ferry. A bridge link to the islands was established in 1946, and J.C. Long, a prominent local attorney and developer with The Beach Company, purchased major tracts of Isle of Palms real estate for development.

In 1938 the Inlet Inn Restaurant at Breach Inlet opened its kitchen. One of only two island restaurants, it was operated by Nell and Griffin Bunch for two years. The eatery was later taken over by one of the island’s future mayors, Carmen Bunch and her husband, Jack.

On December 12, 1944, J.C. Long bought 1,300 acres of island property from Hardaway Contracting Company and began making extensive improvements. Roads were constructed, water and trash collection were made available and a massive building project was launched. Within five years, the small summer resort island of 100 homes developed into a community of 375 homes, with about 250 occupied year-round. Long also provided low-cost housing to veterans returning from World War II.

In 1945 the Ben Sawyer Bridge from Mount Pleasant to Sullivan’s Island was opened to automobiles. The following year, the Surf Deck opened on the front beach and offered dancing, bathhouses, beer and refreshments. Sun bathing and night bathing were also popular with the local teens.

In August1951, the South Carolina Aeronautical Commission completed the Isle of Palms airstrip and landing field. The 1,800 by 135-foot runway, located on the banks of the Inland Waterway, had a crushed oyster shell surface that extended the length of the field.

In 1953, voters filed into the island’s only voting station, located in the Exchange Club, and with 121 in favor and 68 opposing, made the move to incorporate. The City of Isle of Palms came into being on January 13, and Walter I. Chapman, Jr. became its first mayor.

It didn’t take long for the rest of the world to discover this seaside gem, and in the 1970’s, real estate development blossomed. Finch Properties purchased a 1,600-acre site on the northeastern tip, and soon the island sported the Isle of Palms Beach and Racquet Club. It was renamed Wild Dunes Beach and Racquet Club in 1984 and later became known, simply, as Wild Dunes.

In 1985 the resort bought the island airstrip and converted it into a fairway. With nationally recognized golf courses, hotels, and luxury villas, Wild Dunes has become a major vacation destination on the South Carolina coast.

Official talk of an Isle of Palms Connector began in 1973 when local, federal and state agencies met to discuss improving traffic service. This issue remained a hot debate until its construction in 1993.

On September 22, 1989 Hurricane Hugo-the storm of the century-slammed into the South Carolina coast. More than 95 percent of the buildings on the island were destroyed, estimated at over $100 million in damages. The island recovered and rebuilt, and today is more beautiful than ever.

The Isle of Palms has come a long way from its early days as a hunting ground for the Sewee tribe. From that first summer home on a remote barrier island has sprung hundreds more, and a thriving community of over 4,500 residents. The island’s six miles of white sand beach-improved upon, just a bit, with fun eateries and surf shops-are as pristine now as then. The Isle of Palms, truly, is a little piece of paradise.

Sources: Long Island South, by W.W. Wannamaker, Jr. The News and Courier, The City Of Isle of Palms, The Charleston Evening Post, The Moultrie News, The Museum on the Common, The Sandlapper History of the Isle of Palms, by Betty Lee Johnson, and SCIWAY, South Carolina’s Information Highway on the Internet.